Cologne Summer Schools: my experience as an international student

Since I was a child, I was always interested in foreign countries and cultures. I remember having a Larousse Encyclopedia (when the internet was not an accessible resource yet) where I would spend hours and hours staring at the countries’ flags and asking myself why the Nepalese flag had such a triangular design. The thing is: I always wanted to figure out the world and what is out there. The fact that when you cross an imaginary line there may be people speaking other languages and living in ways differently than I do always brightened my eyes.

I discovered that this was more possible than I thought in 2012 when my brother was selected by the Sciences Without Borders program (in Portuguese Ciências Sem Fronteiras – CsF) to study for two years in France with a full scholarship. I was a teenager at that time, and those two years completely changed my ambitions and my perception of how interesting it is to be an internationalized citizen. With the help of the government through public policies for Education, Science, and Innovation, people from the same background that I had were able to become better professionals and academics due to an international mobility experience.

That was the moment the idea of doing academic mobility started to chase me — or I started to chase it. In High School, I was selected as a semifinalist for the Youth Ambassadors Program from the Embassy of the United States in Brazil — almost there! After that, I started my undergraduate course in English at the Federal University of Santa Catarina in 2019. One year later, in March 2020, the pandemic paralyzed academic activities and my dreams of traveling abroad as a scholarship holder.

Two years later, in 2022, it seemed that things were finally coming back to normal. We had vaccines, students were back at the universities, and I was in the final year of my undergraduate course. At that time, I was already dealing with the possibility of not having an international experience during my undergraduate course. The lots of answers telling me “thank you for your application, but no” were already part of my routine. After years of preparation and effort, I finally received a yes: on July 2nd, 2022, I received an e-mail from Cologne Summer Schools (CSS) offering me a full scholarship for a two-and-a-half-week summer school in Cologne, Germany. That was one of the most amazing days of my life.

One month and a few days later, I was in Germany. There, we had a lot of lectures on Inequality of Opportunity, which was the main topic of summer school. We visited the Haus der Geschichte Bonn (the House of the History of the Federal Republic of Germany), and local breweries in Cologne, and had the nicest time ever in an organ concert in the Cologne Cathedral. One of the most important things that I learned from summer school is that, in the entire world, we all have similar problems — most of them result from inequalities and the privileges of some social groups over others. To fight against inequality and create the conditions for people to aspire is necessary if we want to evolve as a society — otherwise, we will need to deal with the same issues that we face nowadays cyclically.

As a member of the University of Cologne KölnAlumni WELTWEIT, which is the official network for University of Cologne alumni, I invite you to get to know Cologne Summer Schools (clicking here) and apply to this wonderful program. Being part of CSS certainly change my life and my understanding of who I am, what the world is, and how many good opportunities there are in life. After that, I felt more prepared to tackle the issue of inequality in my country with an internationalized vision, fighting for social justice in a broader conception of it. 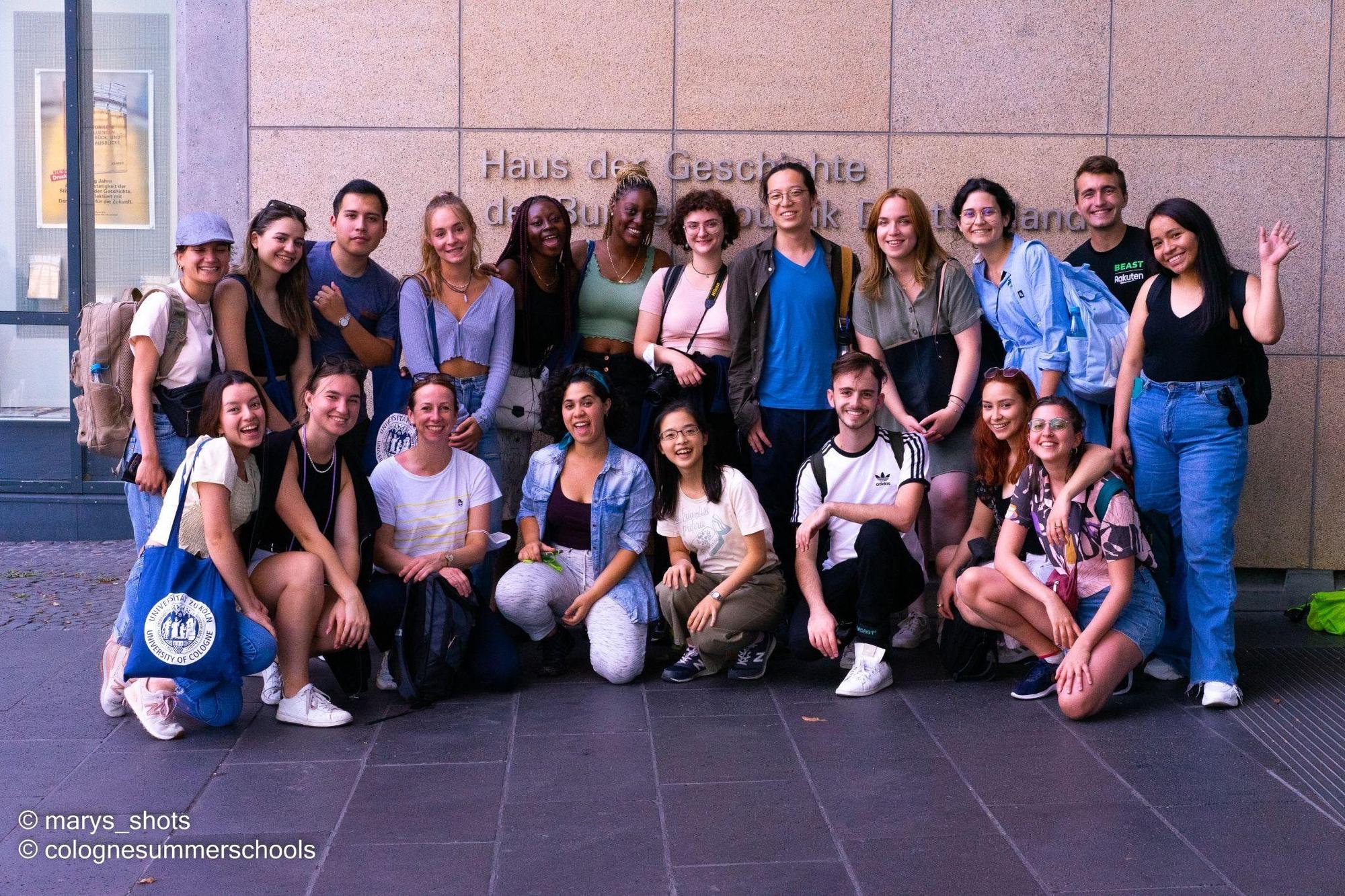 *Photo description: there is a group of students from different nationalities in front of the entrance of the House of the History of the Federal Republic of Germany in Bonn, Germany. Half of them are standing up, and half of them are crouching. The floor is dark and the wall behind them is made of big blocks of concrete, where it is possible to partially see the writings: “Haus der Geschichte der Bundesrepublik Deutschland”.